Swimming with Sea Turtles : A must for divers to tick off! 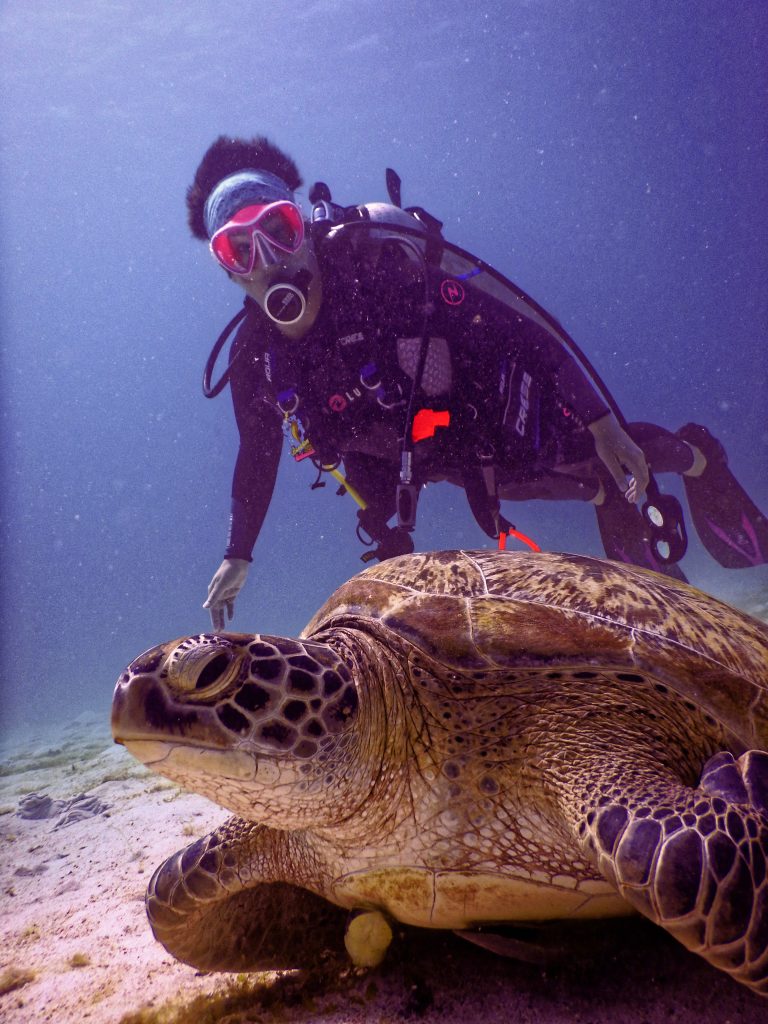 There are seven species of sea turtles around the world — sadly, all are vulnerable or endangered. They are the green sea turtle, loggerhead turtle, hawksbill turtle, olive ridley turtle, leatherback turtle, flatback turtle and kemp’s ridley turtle.

Sustainable tourism can contribute to sea turtle conservation. Have an ethical experience when swimming with wild sea turtles by keeping the following principles in mind:

– Avoid any sort of interference with wild sea turtles.

– Never feed sea turtles as it curbs their natural instinct to provide for themselves.

– Report any suspected violations that are exploitative or dangerous for sea turtles.

If you get lucky enough to see a wild sea turtle gracefully gliding through the ocean keep a respectful distance of at least 20-feet. Use an extra-long selfie stick for your underwater camera to take pictures without getting too close to wild sea turtles.

Book snorkeling trips with local tour operators, or even better, with a conservation project. Vet the tour operator in advance to confirm that they limit the number of people on their tours to avoid distressing turtles and that they don’t allow snorkelers to feed or touch sea turtles. 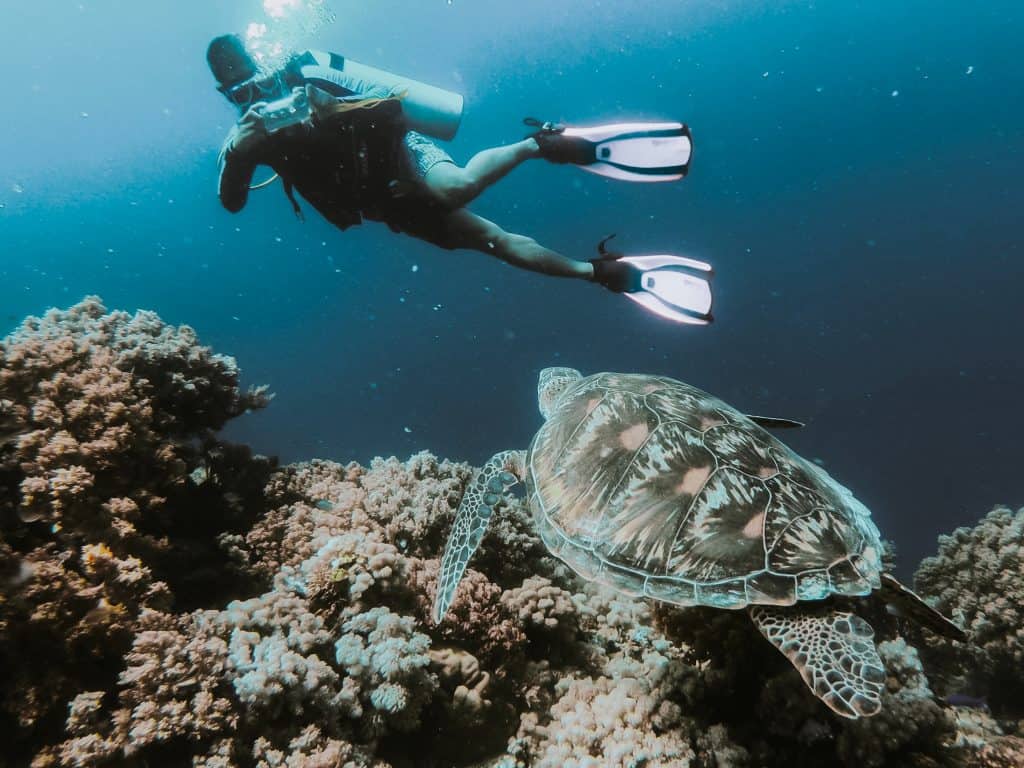 There are a number of factors which are leading to the endangerment of this gracious animal. It is important for us to highlight these reasons as we become more aware of the dangers and ways that we can help them.

Capture through fishing nets is one of the greatest threats to sea turtles as around 40% of all animals caught in fishing nets are discarded as waste.

Marine mammals including sea turtles as wella s seabirds and other species are caught, and then discarded, usually already dead. Sometimes, sea turtles are released from the fishing net out into the waters, but often with severe injuries.

Sea turtles are often attracted to the bait and then get caught and trapped in the hooks, or become entangled in the fishing nets.

Consumption of Turtle eggs and meat

Despite there being legislation protecting sea turtles and their eggs in the majority of countries, there is an ongoing illegal trade of eggs, meat and shells of turtles. In some countries, sea turtles are considered as a delicacy, meaning that locals who poach and sell them are able to earn an income.

Therefore, it is imperative that local communities are able to find other means of earning money that do not threaten this beautiful species.

Coastal Development comprises a number of human activities which threaten the existence of this species. For instance: the development and construction of homes, hotels and roads. In addition, oil platform construction as well as seawall construction can all threaten the habitat for sea turtles and their hatchlings.

The increased level of human activity over the last years has meant increased levels of pollution, objects on the beach as well as unnatural erosion of beaches.

A more specific example of how coastal development is threatening sea turtles’ chances of survival is that sea turtle hatchlings are guided to the ocean at night. But, beachfront lighting will cause hatchlings to become confused when they emerge from their eggs, leading them towards the road where they may not survive.

This danger may be having the biggest threat on the sea turtles as well as other marine life. For instance: sea level rises are already causing the loss of beach and nesting habitat as well as extreme weather conditions which mean there are more severe storms which impact the nesting beaches and cause beach erosion.

Also, warming ocean temperatures influence the way that sea turtles swim from feeding to breeding zones. This means that we can find more southerly species being found in more northerly regions.

It is vital that we understand some of the dangers facing sea turtles today, so that we have the education available in order to try to contribute to more positive developments for sea turtles as well as other marine life.

Sea turtles in general are omnivores, however, their specific diet depends on which sub species they are. For instance: Leatherback turtles feed on jellyfish while Loggerheads feed mainly on lobsters and fish. Green turtles are vegetarian so eat sea grasses. Olive Ridley sea turtles mostly eat jellyfish, snails and shrimp – though they may feed on seaweed as well.

Here are a few locations we would recommend if you want to go swimming with sea turtles. 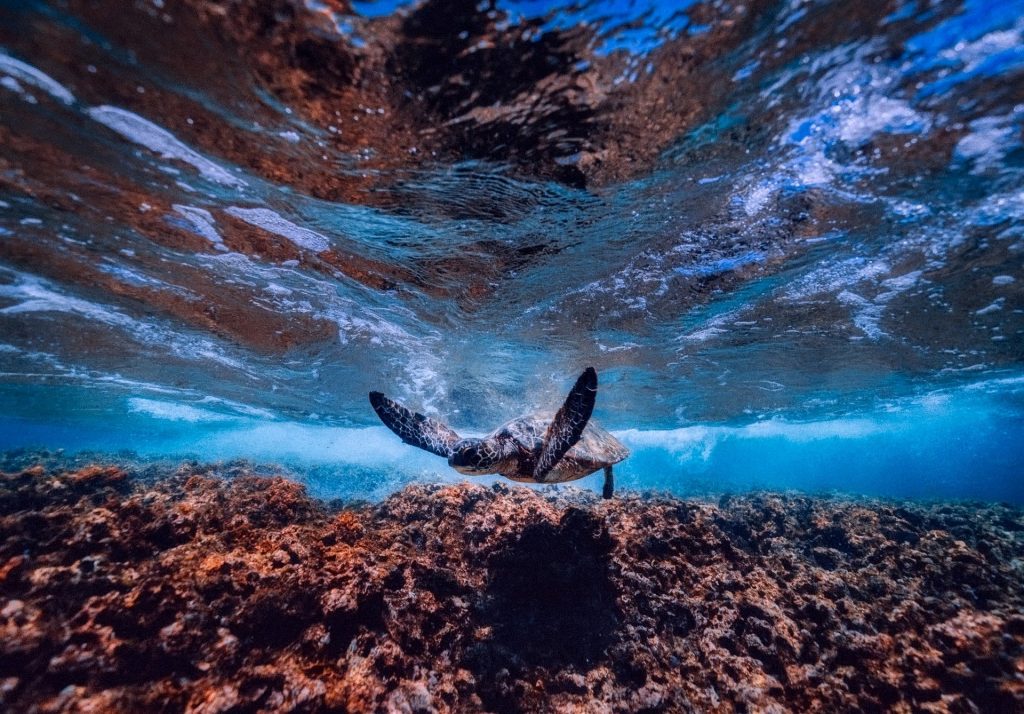 Pikaia sits within a Galapagos Tortoise reserve, so guests may encounter sea turtle just by exploring the land surrounding the lodge — no guide necessary. The Galapagos Islands is one of the only places in the world where you can encounter turtles on land and sea. The giant Galapagos tortoise is the land turtle, but the islands have a rare species of sea turtles, referred to as Galapagos Turtles, which have a darker shell color. 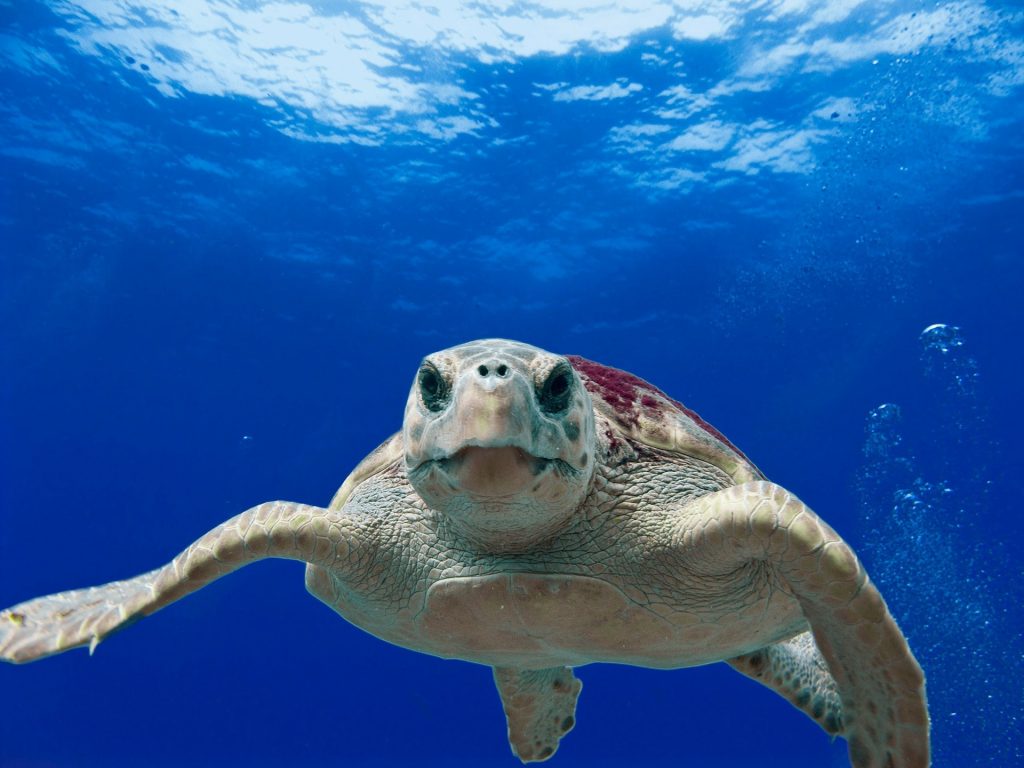 At Two Step, the regular visits from dolphins and seals make it easy to forget that this is also one of the very best places on Big Island to see green turtles. They often rest 4 to 5 meters deep. Yet another reason to get into the water at this exceptional spot!

You can see green sea turtles in almost all the snorkeling spots on the Big Island, and particularly at the Captain Cook Monument 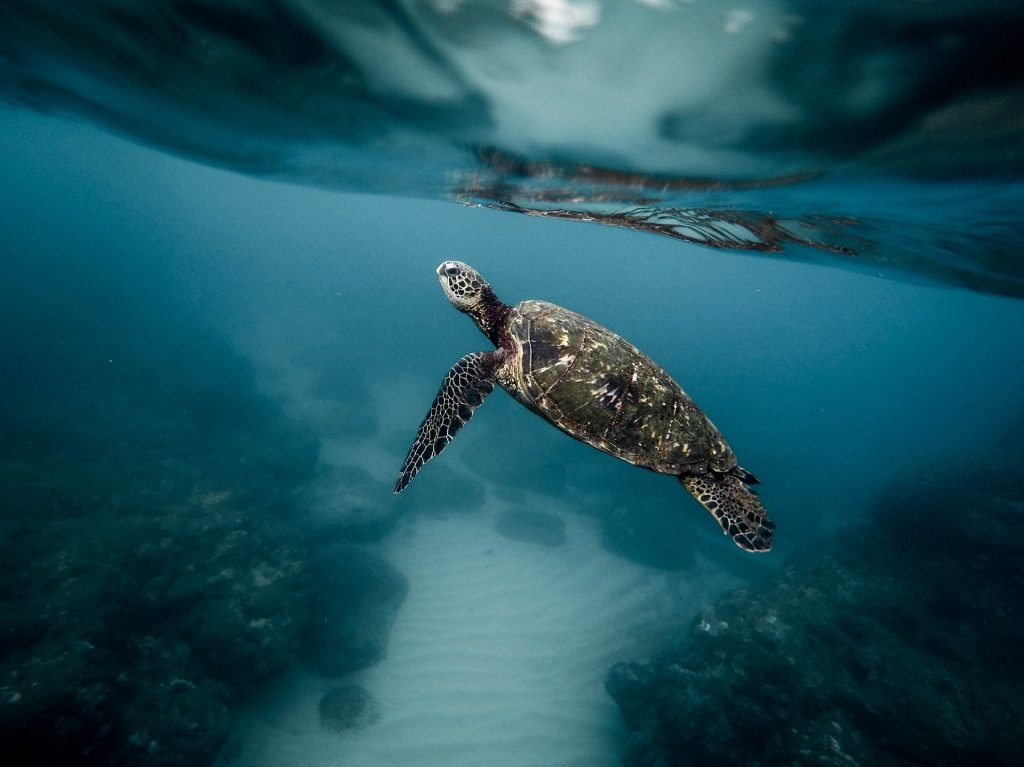 The waters around La Digue are one of the best places in the world to see hawksbill sea turtles. In Anse Caïman, you can often see several sea turtles swimming around the immense blocks of granite immersed in the Indian Ocean, 4 to 6 meters deep. Hawksbill sea turtles regularly visit most of the spots in La Digue, and you can try your luck at Anse Patates or Anse Sévère, for example to swim with sea turtles. 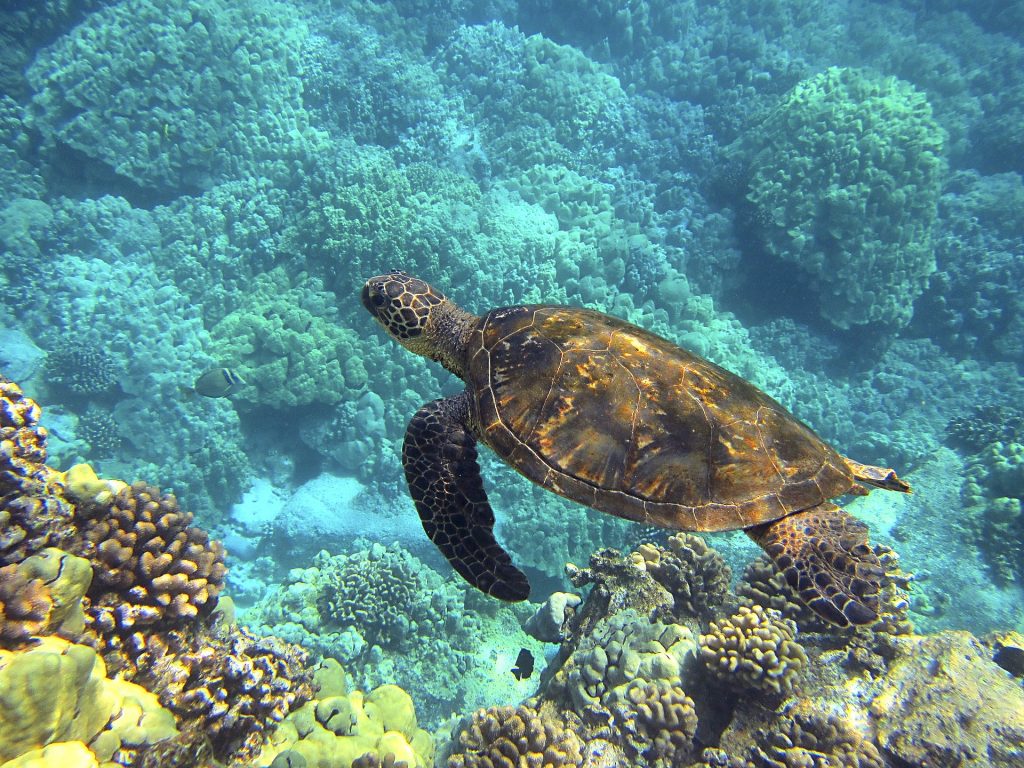 Located on Oahu’s North Shore, Turtle Bay Resort highlights snorkeling with the sea turtle in Oahu as a must for every Turtle Bay visit, as it is home to many green and hawksbill sea turtles. You can spot these sea creatures on every kayak tour and by snorkeling in the lagoons and ocean that surround Turtle Bay. 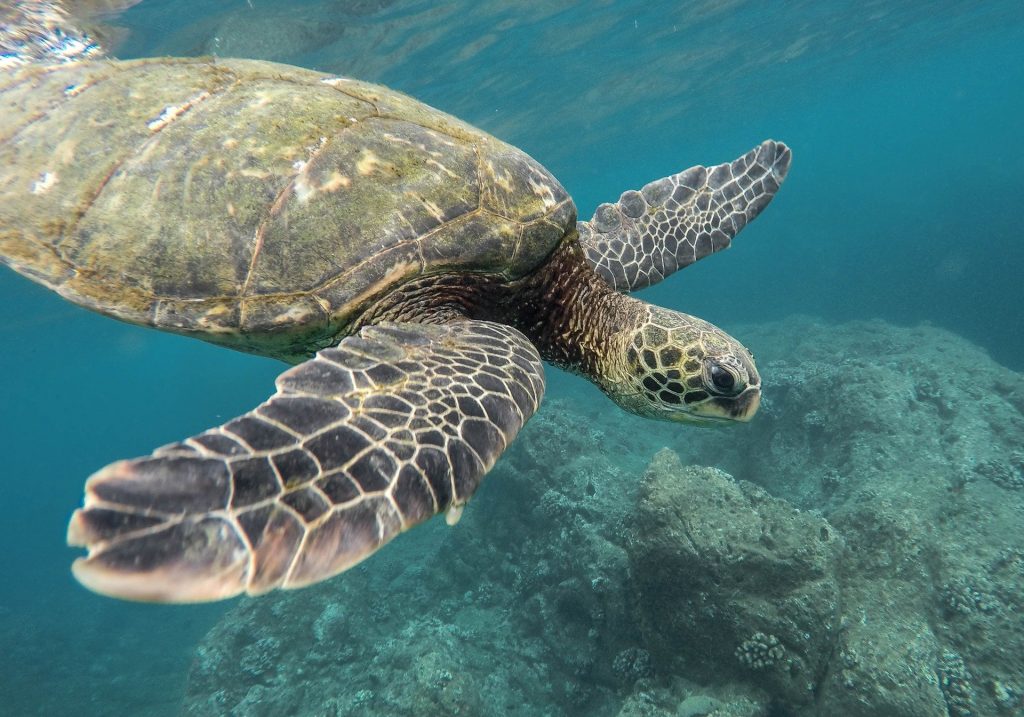 Marlon Brando actually created his own turtle release initiative decades ago for his son, Teihotu. From September through April, green turtles swim to the island of Tetiaroa (where The Brando is located) to lay their eggs. Tetiaroa is a major sea turtle nesting site, and guests can view turtles November through April. Guests can swim with the sea turtle and visit the on property research station to learn even more. 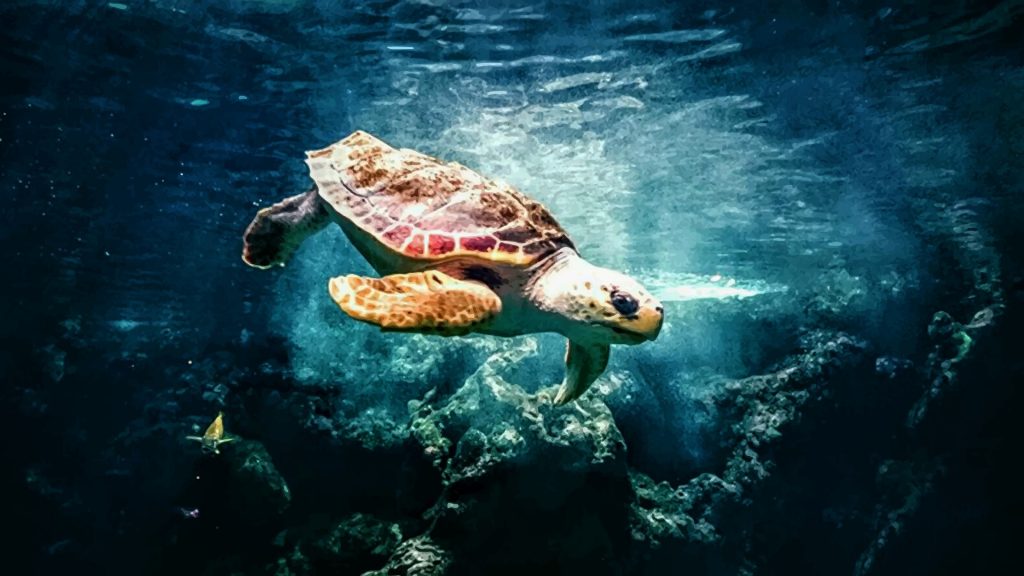 The Tobago Cays are a group of 5 islets sheltered by a horseshoe-shaped coral reef located in the Grenadines archipelago. Their white sand beaches and crystal-clear waters make them one of the most enjoyable ports of call in the Caribbean. As they are protected by a Marine Park, the Tobago Cays also are a paradise for snorkelers. They are especially notorious for the green sea turtles that gather in great numbers right under the water surface.

Summary
So we have provided some advice & hopefully some useful pointers on how and where you can swim with turtles. so just relax fully and enjoy your time in the ocean and with its beautiful marine life as they are a gift….. 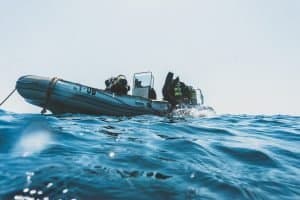 Scuba diving is an exciting opportunity to explore the natural world in unforgettable locations. Without proper safety gear and safe diving practices, this fun hobby 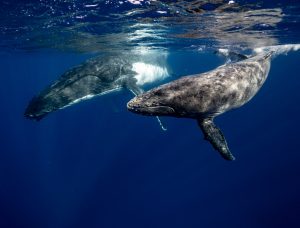 Can you get eaten by a whale?

Can you get Eaten by a whale? It’s comforting to think that if you were somehow swallowed by a whale like Jonah or Pinocchio, you’d 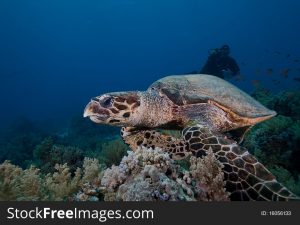 What marine animals are endangered?

Until recently, humankind seemed to view the ocean as a source of infinite resources. Its vast size and depth and unexplored frontiers made the ocean appear invulnerable to overexploitation. The truth is very different. 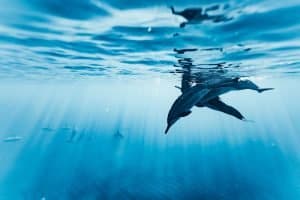 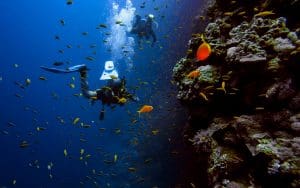 Dive bags: The best scuba bags to choose from in 2022

We all love scuba diving and snorkeling but if you use your own gear like i do, then you will need a dive bag. Dive 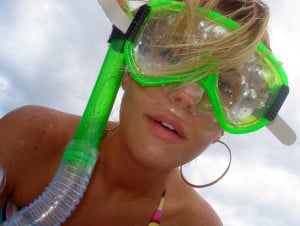 Are you all set to hit the beach with your kids? So if your kids are like mine, then they have recently discovered the joy