What types of coral reef are there?

Often nicknamed the “rainforests of the sea,” coral reefs are some of the most diverse ecosystems on Earth. Scientists believe that more than a million species around the world live on coral reefs. At any one reef, thousands of species can be collected or observed living there. It is therefore not surprising that coral reef scientists – like their colleagues working in rainforests – discover new species living in this ecosystem all of the time. 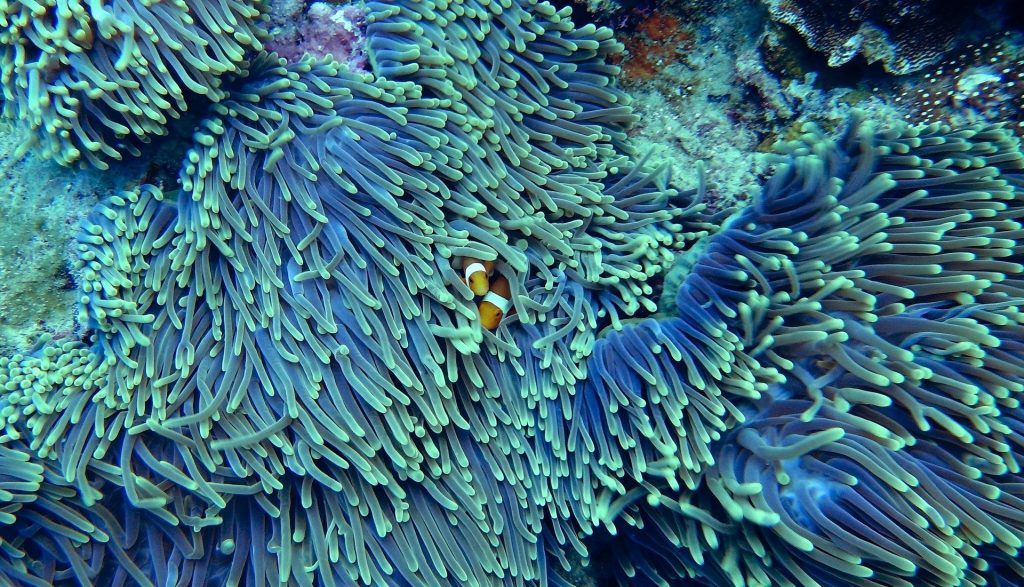 Fringing coral reefs grow near the coastline around islands and continents. They are separated from the shore by narrow, shallow lagoons. Fringing coral reefs are the most common type of coral reef that we see. They are considered to be the youngest of the 3 types of coral reefs. They are separated from the shore by shallow lagoons. The first stage of the formation is when the coral larvae attach themselves to rocks or soil near the coasts. In certain parts of the world, they tend to form where volcanoes have also formed due to the shallow sloped walls being ideal to make shore reefs. The larvae become polyps and excrete calcium carbonate, which forms their exoskeleton. The secreted calcium carbonate sediments on the rocks and provides a substrate for more polyps coming to attach themselves. As more and more polyps attach, and layer over time, they create a coral reef. Calcareous Algae also add their sediments to the structure. Other organisms with calcareous skeletons, also add their own remains to the reef as they die and sink.  Since fringing coral reefs are the youngest and grow onshore, they tend to have less diversity of species within that ecosystem. Some locations of these reefs include Kenya, Australia and other parts of Africa shores.

Barrier reefs also parallel the coastline but are separated by deeper, wider lagoons. At their shallowest point, they can reach the water’s surface forming a “barrier” to navigation. The Great Barrier Reef in Australia is the largest and most famous barrier reef in the world. The term “barrier” comes from the more shallower coral that sticks out of the water and creates a barrier or wall-like structure.This reef is around 1200 miles and consists of many complex reefs making it up. This type of coral reef is formed when the fringing reefs slowly combine with each other and form a borderline along the coast. The calcium carbonate structures attract more polyps and the spaces are filled up. It forms a line along the coast and a ring around an island. Large barrier reefs are the rarest type of coral reef and only seen in a select few places on earth such as Belize and parts of the southern Pacific Ocean. Smaller barrier reefs are seen in places where islands are in an earlier stage of becoming submerged.

Atolls are rings of coral that create protected lagoons and are usually located in the middle of the sea. Atolls usually form when islands surrounded by fringing coral reefs sink into the sea or the sea level rises around them (these islands are often the tops of underwater volcanoes). The fringing coral reefs continue to grow and eventually form circles with lagoons inside. Most atoll coral reefs can be found in the Pacific ocean where the waters are warm and salty. They can grow between the sizes of 12.6 km2 (Great Chagos Bank) and as small as 1.5 km2 (Ontong Java reef).  More animals are found in an atoll than in earlier stage reefs. Over a million species can live in one square kilometer of coral reef. The three types of coral reef from fringing to barrier to atoll, form in this sequential order and represent stages of development of a reef.

Patch coral reefs are small, isolated reefs that grow up from the open bottom of the island platform or continental shelf. They usually occur between fringing reefs and barrier reefs. They vary greatly in size, and they rarely reach the surface of the water.

All three types of coral reefs offer important ecosystem services that benefit ocean ecosystems and human society. This is even more impressive when we consider coral reefs cover less than 1 percent of the earth’s surface and less than 2 percent of the ocean floor, yet they support more than 25 percent of all life in the ocean. From providing food to shelter to safe places for spawning and nurseries, they are very important to the ecosystem. Coral reefs also become much of the sand we love to dig our toes into on tropical beaches. When strong waves or ocean animals break off old or dying sections of a reef, their calcium carbonate skeletons get pulverized or digested into a fine sand that  eventually settle and build up on the world’s beaches. 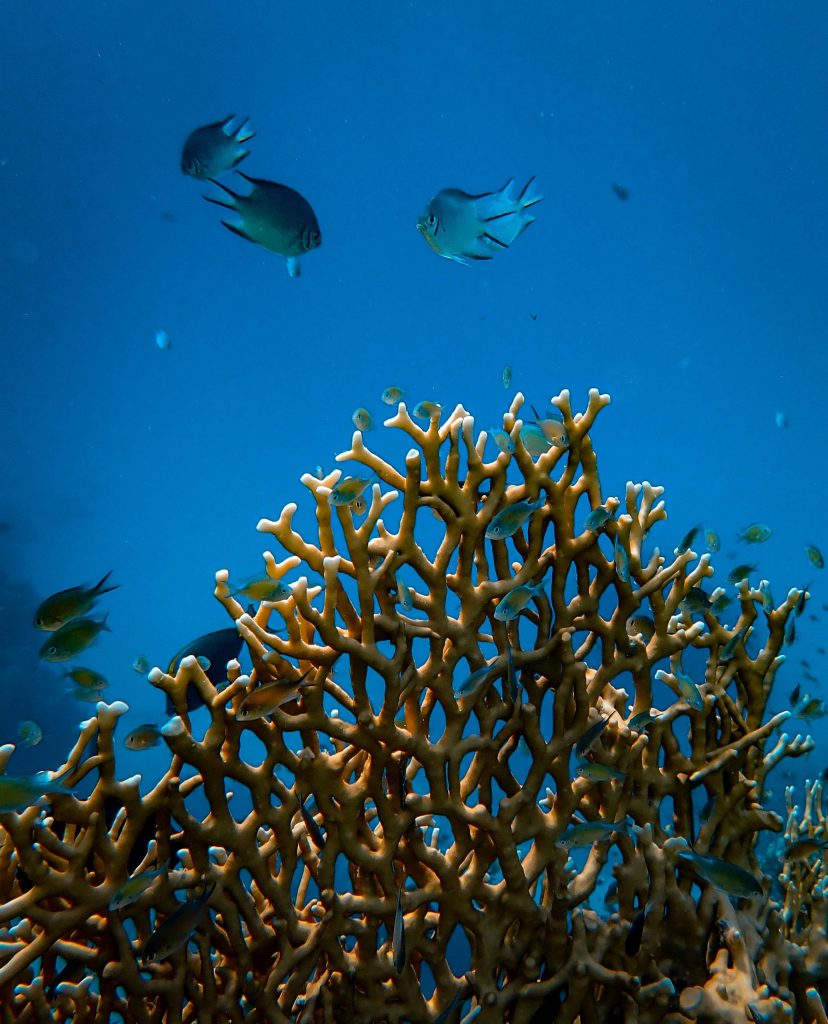 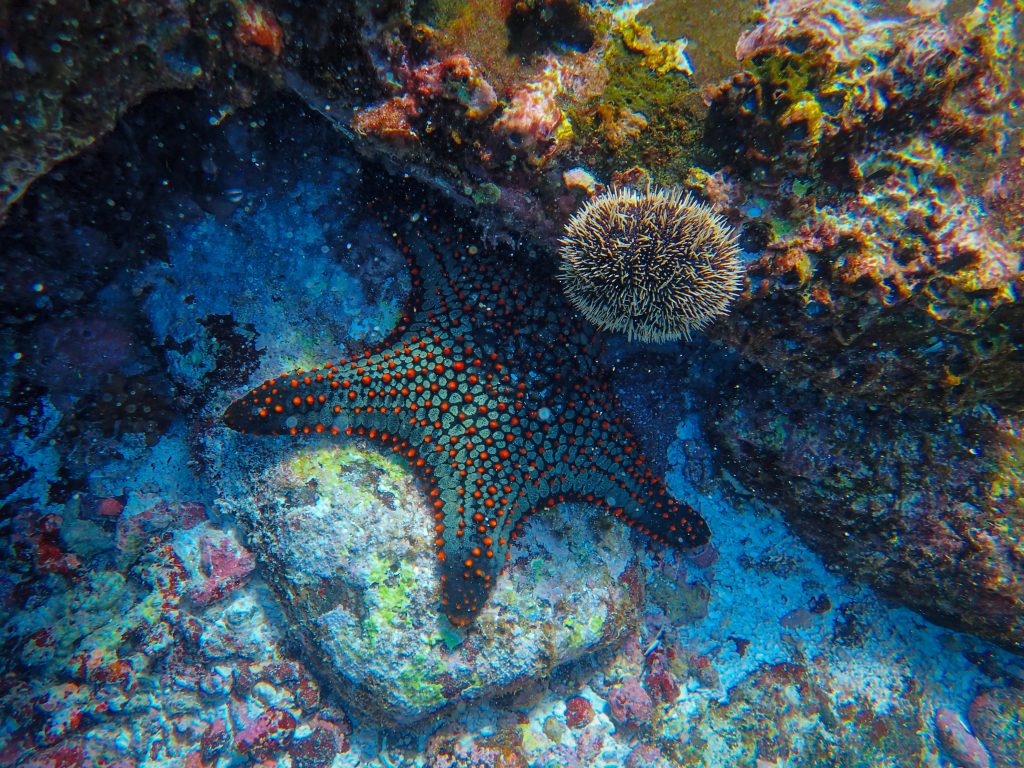 A coral is known as a polyp. It grows no larger than a human fingernail and is often only the size of a pinhead. It has a simple, tubelike body with tentacles at one end.

Most hard corals reproduce by budding, a process of forming small buds that develop into new polyps. The polyps build hard, cup-shaped skeletons around their soft bodies. Sometimes, corals reproduce from eggs. A larva hatches from an egg laid by an adult polyp. The larva drifts through the water until it reaches a spot it can attach itself to, usually part of an existing coral reef or other limestone structure. The young polyp produces a material called calcium carbonate, also known as limestone. This hardens around the polyp and joins it to the reef.

The exoskeletons protect corals from enemies. Some predators, however, can wear right through the hard material, a process known as bioerosion. The parrotfish, for example, has a beak-like mouth that tears through the exoskeleton to the coral within. While eating, the parrotfish chews and eats the limestone, which is then ejected as sand.

Corals usually live together in large groups, called colonies. Colonies are typically made of millions of genetically identical corals—natural clones produced by budding. Side by side, the polyps build their exoskeletons. As the animals die, more polyps build exoskeletons on top of the remains.

Different species of corals build formations in different shapes. Some look like branching trees or bushes. Others look like large domes, fans, or antlers. The bodies of living polyps are often vivid colors of pink, yellow, blue, purple, and green.

Coral colonies usually only grow in shallow water, often no deeper than 46 meters (150 feet). This is because tiny organisms called algae live inside most coral polyps. Algae are vital to these coral because they produce chemicals that help polyps make calcium carbonate. Algae need sunlight to survive, so the corals will not grow in water deeper than sunlight can penetrate. Algae are also what give corals their bright colors. Because the algae that live in coral thrive only in warm water, coral reefs grow mostly in the ocean waters of the tropics.

Ocean Anatomy: The Curious Parts & Pieces of the World under the Sea 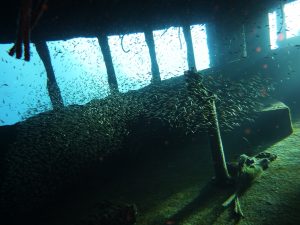